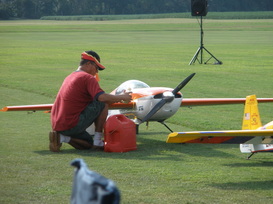 The 2010 Clover Creek Invitational varied slightly from the inaugural event with the addition of a fourth day of Invitational competition.  The Invitational class also increased in size from 2008, and the IMAC classes were composed of the best that each of the six IMAC regions had to offer.  The IMAC pilots were comprised of 2009 and 2010 US National Champions, 2009 Tucson Champions, 2010 Regional Point leaders, as well as international IMAC contestants from Puerto Rico!  The IMAC fliers again competed for recognition, to stake their name as the best pilot, plus some super prizes from the many sponsors that generously donated products.  The Invitational Class competed for top honors as the next Clover Creek Invitational Champion, and a slice of the $50,000 cash prize, $20,000 of which went to the winner!


Day one, Thursday September 2, dawned with a bit of ground fog and an uneasy tension in the air as the Invitational pilots prepared for a contest opening Unknown sequence.  Anyone who has ever flown a scale aerobatics event can tell you that unknowns are some of the most anxiety provoking moments of a contest.  While there was some nervous flying, it was immediately clear that these guys were here to do business and this was going to be a battle from start to finish.  After day one, an Unknown sequence, and three Known sequences, there was a log-jam atop of the leader board with Jason Noll, Mark Leseberg, Kurt Koelling, Andrew Jesky, and David Moser all well positioned and fighting for the lead.

After completion of the last round of the Invitational Known, the field was opened up to practice flying for all contestants.  Of particular interest was a maiden flight on a plane to be used in the competition!   A day earlier, Jason Noll suffered an unfortunate and stunning crash when the wing on his Edge 540 failed while he practiced freestyle.  The crash was nothing short of spectacular, but it left Noll without a freestyle plane for the contest.  At 5:30pm on Wednesday afternoon, he called his sponsors and new equipment was on the brown truck over night so that he would be able to continue on with the competition.  What happened next is nothing short of remarkable, and epitomizes the sense of community and comradeship that is rarely seen in many other competitive arenas.  Faced with building an aircraft during the first day of competition, friends and competitors alike pitched in and completed a new freestyle plane in time for an afternoon shakedown flight.  The plane, engine, and all radio equipment showed up before lunch time and all the volunteers went straight to work.  At times there were as many as 15 people working on the plane to ensure it was ready for him to perform the test flight, and after 6 hours, the plane was ready for its grueling initiation.  This display of sportsmanship and unselfish act of kindness says a lot for the level of respect the pilots hold for one another and was repeated many times over the course of the contest.  Gabriel Altuz flew borrowed aircraft in both the precision and freestyle portions of the event when shipping arrangements fell through at the last minute for his own aircraft.  Dan Rathbun flew a borrowed aircraft for the entire contest in the unlimited class, Mike Gabbard, in Sportsman, flew a competitor’s plane from within the same class when he experienced some mechanical problems part way through the event.  And more than one pilot was witnessed helping troubleshoot and repair a competitor’s aircraft over the course of the competition.  In what other sporting or competitive endeavor do you see this kind of willingness and cooperation among competitors?  These guys want to win, but they want to win in the air, not because a rival is grounded.  On to Day two.

Friday brought about weather changes, a fluid leader board, the first round of the highly anticipated Freestyle, and, of course, the opening rounds for the IMAC categories.  Overcast skies and an unusual crosswind greeted the IMAC pilots as they prepared for their opening Unknown sequence.  Fortunately, the forecast rain never materialized and all the scheduled flying was completed without delay.  Much like the Invitational class, all the IMAC pilots came ready to compete and the standings were squeaky tight in every category.  The Invitational Unknown number two shook up the standing a bit as nearly every pilot had a zero thanks in large part to a tricky cross-wind tail slide.  The completion of the Unknown set the stage for the Freestyle, and the big boys did not disappoint!  For the crowd, the highlight of the free was Gabriel Altuz’s high-energy, low-altitude flying that left spectators breathless, and the soybeans cowering, did I mention he did this with a borrowed aircraft, and at low altitude?  Mark Leseberg flew a tried but true routine that fit the criteria to a tee and collected the top points for the freestyle round.  The free flights wrapped up the day for the Invitational class and many of the pilots accepted the Schroder’s invitation to enjoy a dip in the salt-water pool adjacent to the main house while the IMAC classes took the field for their Known flights.

Cool and clear, day three proved to be a spectacular taste of early autumn and provided picture perfect flying conditions. Up first, the IMAC classes continued their battle with a second Unknown.  Standings remained razor tight with every class up for grabs by one of several pilots.  The Invitational class followed with Unknown three, another round of Known, and round two of the Freestyle.  For some, today would be their last chance to show what they had as the cut to the final seven would be made at the evening banquet.  Once again, the freestyle flights did not disappoint as the routines were fast, low, and packed with high-energy maneuvers.  Saturday wrapped up with a banquet dinner where the top seven finalist were announced, and two more Unknowns for the Invitational class and the third Unknown for the IMAC classes where handed out.

The finals:  With the field trimmed to seven, the atmosphere among the Invitational pilots was a bit more anxious than on previous days.  The finals consisted of two rounds of Unknown, Known, and Freestyle flights to decide the best of the best.  Jason Noll, Mark Leseberg, Andrew Jesky, David Moser, Kurt Koelling, Gabriel Altuz, and Chris Maier lined up to take their best shots at one another for the title of Clover Creek Invitational Champion.  Through 6 flights they battled it out, flying a new Known sequence, two nasty Unknowns, and two Freestyles that saw several pilots roll out new routines.  The IMAC classes also put in their final flights of the contest with another Unknown, and an additional flight of the Known.  With the positions too close to call, every flight counted, and standings changed right up until the last prop stopped turning.  When the dust settled, and the scores were counted and re-counted, Jason Noll had repeated as Invitational Champion by a scant 7.5 points!  Dan Rathbun came out on top of an extremely close race in Unlimited, Matthew Stringer topped Advanced, Benjamin Batts won Intermediate, and Bryant Mack turned in the only dominant performance of the contest to take home top honors in Sportsman.  The 2010 Clover Creek Invitational wrapped up with a perfect Western Tennessee sunset, and created a legacy that will be very difficult to top.